There is a number of nice places around Oxford to go for a walk or a run, in case you want some fresh air.

My favourite running route is round the University Parks. The perimeter is a bit over 2km. There are two entrances on the west side on Parks Road, one on the north right beside Lady Margaret Hall, one on the east across the River Cherwell, and four on the south in various places in the Science Area. You can cross the river and run on some tracks through the fields towards Marston. Note that the gates are open only from dawn to dusk.

Another nice place is Port Meadow, an ancient area of common land. There is convenient access from the end of Walton Well Road, close to the Maths Institute. In case you need refreshment, there is also access on the west across the River Thames to The Perch, and on the north through Wolvercote to The Trout at Godstow, two very nice pubs. There is also a lovely path up along the west bank of the Thames.

If you want to go for longer, you might explore the towpath along the Oxford Canal, which runs north to the Midlands. There are about eight access points, starting with Hythe Bridge Street in the city centre. (A little to the south, the canal joins the River Thames.)

Of course, you can always just walk around the city streets too, looking at the buildings; but they are quite narrow, and you’re likely to get tangled up in pedestrians if running.

For an alternative, more leisurely, form of exercise and fresh air, you might try the Oxford tradition of punting, in flat-bottomed boats propelled with a long pole. The nearer punt rental to the conference venue and accommodation is the Cherwell Boathouse, which also has an excellent restaurant; or you could punt northwards through the fields to the Victoria Arms, another very nice pub. Next to Magdalen College in the centre of town is Magdalen Bridge Boathouse. 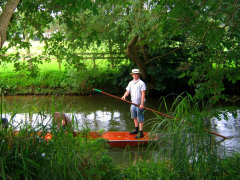