Algebraic effect handlers generalize many control-flow abstractions that are implemented specially in most languages, like exception handling, iterators, or backtracking. In this article, we show how we can implement full support for asynchronous programming as a library using just algebraic effect handlers. The consistent type driven approach also leads naturally to powerful abstractions like block-scoped interleaving, cancellation, and timeouts that are lacking in other major asynchronous frameworks. We also introduce the concept of ambient state to reason about state that is local to the current strand of asynchronous execution.

I am a member of the Research In Software Engineering (RISE) group and chair of the Programming Languages working group (PLX). Currently, I am interested in the design and application of strong type systems and declarative programming languages, like Haskell. In particular, I am interested in programming with Effect inference in the Koka project. Furthermore, I work on domain specific embedded languages, language design, and compiler technology. 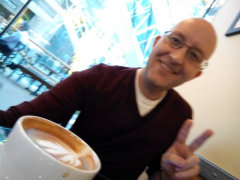